On parties and playdates

Yesterday, I dressed up as a princess to go to a birthday party with with almost-5-year old daughter.  It was a princess-party, obviously, attended by about a dozen friends from pre-school, and parental escorts, all dressed up.  The house was beautifully decorated with lanterns and banners. There were fancy cookies, pinwheel sandwiches, fruit kabobs, and a rice krispy tower. Rapunzel, herself, was even there as a special guest.

Meanwhile, beyond a gathering of aunts and uncles and grandparents, I have never even hosted a birthday party for any of my three girls.

I had always thought that turning five was a good time to start throwing birthday parties.  But my oldest is now six and a half, and my middle is about to turn five. And we're still party-free.

We also don't do the playdate circuit.

It's just always seemed too complicated to me.

As for birthday parties, my excuse is partly because my oldest's birthday is in early September,  before school starts.  And at five turning six, she didn't yet have a real established group of friends.  Or least friends for which I had the contact information for the parents.

I guess that is the real problem here.  My unease in being socially outgoing.  I'm just not good at initiating relationships, making connections and developing friendships.

Which I'm mostly okay with, personally.

But for my daughters, I know that I need to work harder on this.  It's hard to justify not giving them a birthday party just because I'm uncomfortable approaching their friends' parents.  I don't want to feel responsible for denying them opportunities to have fun with their friends, or for leading them to be as socially awkward as their mom.

So I'm going to work on this.  It'll be as good for me as for them, right?

Next question: Is two weeks enough advance notice for a birthday party invitation for my five year old?
Posted by Unknown No comments:

How to be a Leader

Last year, as part of a employee development activity at work, I read "The Leader with no Title" by Robin Sharma.

Since then, I have thought about the book a lot.

But I'm not sure whether it has helped me, or made me more confused.

The Leader with no Title was the first motivational, leadership, career-building self-help book I've ever read. And I'm glad to have read it. But I don't think that it has motivated me to read many more.

It's written in what they call a 'modern day fable' style, which makes it a really easy read.  It is also filled with many gems of wisdom and inspirational quotes, which, although individually valuable, quickly become overwhelming and tedious when they are so often repeated, and paraphrased, page after page.

In addition to the pages full of cliches, I was also bothered by the acronyms for the "leadership conversations", given as a means to remember and practise the values that yield leadership.  For example:


The Fourth Leadership Conversation – To be a great leader, first become a great person: SHINE: See clearly, Health is wealth, Inspiration matters, Neglect not your family, Elevate your lifestyle.

I was also initially quite annoyed by the main premise of the book: that you don't need to be a manager or 'big-wig' to be valuable to your company.  It almost seemed like a conspiracy.  Like if some HR directors and CEOs figured out that they may be able to get their average-joe employees to contribute more to the bottom line by boosting their esteem, telling them that they too can be leaders, and convincing them that the big paycheques, corner offices and managerial perks aren't really important in life.

Yes, it's true.  The managerial perks and big paycheques aren't the most valuable things in life.  A meaningful life comes from doing what we love and loving what we do.  I get that.

The book focuses a lot on what we can do to improve our lives, rather than looking externally for things to make our lives better.   Quite similar to the circle of influence described by Steven R. Covey in The Seven Habits of Highly Effective People.

Another book I haven't read.  But probably should.

It just doesn't always seem that simple.  And the reading of this one book was definitely not enough to have me utterly convinced that its a simple concept to practice and embrace.

And yet still, I try.

I did take several ideas away with me which I keep going back to in my own head.

Small daily improvements – over time – lead to stunning results.
Beliefs are nothing more than thoughts we’ve repeated over and over until we’ve made them into personal truths.  Every belief inevitably becomes a self-fulfilling prophecy.

Leadership is about knowing very little about most things and a staggering amount about a few things.  Getting things done is not the same as doing great things.

The fear you move through when you go to the edge of your limits actually causes your limits to expand.

The deeper your relationships, the stronger your leadership.  Leave every single person that intersects your path better, happier, and more engaged than you found them.

I don't know if I'd describe The Leader with no Title as a life-changing read.  But it certainly has stuck with me.
Posted by Unknown No comments:

How to spend a Sunday

My husband just asked me what I wanted to do today.

My answer is nothing really.  I don't want to make any plans.  I just want to let the kids watch tv. Play. Make a mess.

Last week was a blur, and I never really felt on top of anything.  We ordered pizza one night for dinner.  I was pretty close to late picking up the kids on two nights.  I felt like I was scrambling all week long.

So for today, I've got some things that I want to get done.  (I'm also mentally working on a list of things to do when I plan for a week's vacation, i.e.  time off work to do work at home, sometime in May.)  But for now, I just want to try to get ahead so I can feel organised and prepared for the week ahead.

Posted by Unknown No comments:

Things I Write About 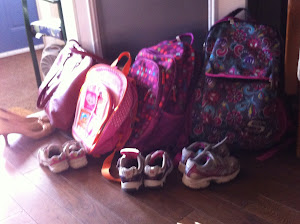 Just an average working mom. That's me. No different than any other working mom. I love my family and I enjoy my job. I think I'm pretty good at both. I try to do my best at home and the office, but like everyone, I'm working to find balance between my life at work and my life as a mom to three young girls, all while still trying to find and follow my own dreams too. I'm certainly no expert. I'm not even close to having figured it out. But writing about it definitely helps.